A Walk in Two Worlds

The past versus the present; Indigenous but also queer; racism as well as homophobia. The life of the two-spirit people is filled with duality. Story by Michael Ott
Michael Ott
Christianization of Indigenous people, history, Identity, residential school system, two spirit

“The place where two discriminations meet is a bad place to live,” Jeremy Dutcher says. 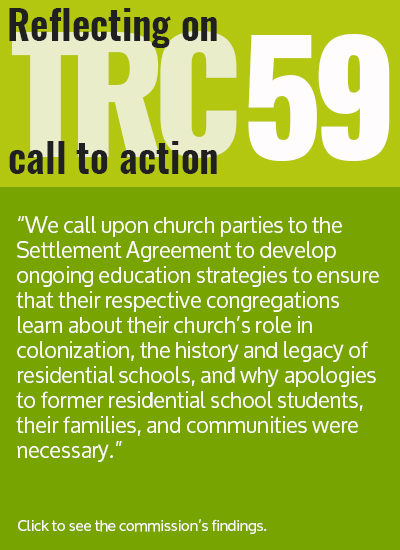 He’s the Aboriginal Projects Coordinator at Egale Canada, and is in charge of the Two Spirits, One Voice project. He’s a confident speaker; his voice is clear and his words are concise. He seems wise beyond his years.

The two discriminations he’s referring to are those that make up his marginalized identity. Dutcher is two-spirit – an Indigenous person who does not identify with rigid notions of gender or sexuality.

“I came out when I was twelve,” he explains. “My mother had always used terms like ‘two-spirit’ to refer to me but she never explained it to me. I don’t think she had a comfortable, working familiarity with it enough to actually support me through that journey.”

Dutcher’s experiences are not unique to him as a two-spirit person. Many two-spirit people face harsh discrimination from both inside and outside the Indigenous communities. Much of this discrimination is a direct result of the residential school system, and more generally, Christianization of Indigenous peoples.

According to Dutcher, we can’t dance around where the blame should lie, and that we have to “call a spade a spade.” He says Europe and Christianity are directly at fault for the homophobia and transphobia that two-spirit people face today.

"We have to call a spade a spade. Europe and Christianity are directly at fault for the homophobia and transphobia that two-spirit people face today."

“The two spirits were very respected in daily life. They were able to access both male and female aspects of life,” Dutcher explains. Historical documentation and other oral accounts support this. The two-spirit people were considered special by the majority of Indigenous tribes pre-contact. They were able to walk in both worlds of gender and perform the tasks and duties of both men and women simultaneously.

However, according to oral accounts and historical documentation, European colonizers brought with them Christian values, which meant people born with male genitalia had to act masculine, people born with female genitalia had to act feminine, and the two could be attracted to only each other. Anything that strayed from this puritanical ideal was “barbaric” and went against Christian teaching.

The Jesuits came in the 1700s, and eventually, the residential school system followed. Both would force these Christian ideals onto the Indigenous people. Colonization worked to erase the contributions of many two-spirit people to their communities and forced them into binary boxes of male and female. These stories remain with the two-spirit people.

Today, two-spirit people like Jeremy Dutcher have worked extremely hard to reclaim their identities and be recognized by not only their own communities but by Canadian culture in general.

Dutcher says it’s a process of “unlearning” the prejudices taught by colonization, and “coming in” to an identity as opposed to the typical idea of two-spirit or LGBTQ+ people having to “come out.”

Margaret Robinson is a two-spirit and bisexual woman who has been an outspoken advocate for her community. She also hosts a podcast about two-spirit identity, with focuses on reclamation, restoration, and the history of trauma and colonization for two-spirit peoples.

"It’s a process of unlearning the prejudices taught by colonization, and coming in to an identity."

Robinson is eating lunch at her office – the Ontario HIV Treatment Network – and slowly sipping her coffee.

“An identity in your own culture should feel like home.”

She explains that having an identity within your own culture is comforting and that many two-spirit people are not accepted or comfortable in the mainstream LGBTQ+ movement. “The queer community is not safe,” she says, referring to the common racism present in many LGBTQ+ spaces, “But, in the Indigenous community, you only have to worry about being two-spirit, which isn’t as hard.”

Robinson laughs, and then makes an analogy to The Karate Kid.

Robinson has done work in health advocacy for two-spirit people for many years. Part of her work has focused on HIV awareness and prevention, as two-spirit youth are much more likely to contract the disease than other Indigenous youth or other queer youth. Furthermore, two-spirit youth are often at risk of high rates of homelessness, violence, and sexual assault due to systemic prejudices built into our culture and our institutions.

She says the solution begins with identifying colonialism’s role in the definition of gender we use today. While many Indigenous groups did not even have words in their language for the different genders, they were taught there was only two.

The next step in the healing process – “recognizing that physical, mental, and spiritual health are all linked,” Robinson says. Indigenous communities were forced to endure extreme trauma and abuse during the residential schools. Rediscovering your culture and your place within it is indescribably important, especially for two-spirit youth.

Nicole Tanguay is a two spirit Indigenous person who identifies as “they and butch.” They chuckle after that description of themselves. “I was born with female parts, buy my energy is male. The Creator knows who I am.”

Tanguay says the biggest struggle many two-spirit people face is being recognized in their own communities, due to the entrenched Christian values that were taught during the residential schools.

“The impact of the schools will last several generations,” they say.

Tanguay is frustrated with how the two-spirit people have been pushed into prejudice by colonization. They’re the type of person to not pull punches when calling out the guilty – namely the Church.

"The solution begins with identifying colonialism’s role in the definition of gender we use today."

“When the two-spirit people went underground, the info went with them,” they explain. “Why isn’t it written down? The stories are lost.” They suggest that many two-spirit people hid their identities out of fear of being “pegged as gay.” People went into the closet, and the Church worked tirelessly to promote heteronormativity and gendered ideals of man and woman.

Part of the future, Tanguay says, is reclaiming the feeling of being two-spirit and becoming aware of what it means – hopefully replacing the Christian ideals that pervade society now.

Tanguay works with art workshops for two-spirit youth to express their identities.

The goal, Tanguay says, is to normalize the two spirit voice, “This is who you are and it’s okay. It’s about seeing a person as a whole.”

While Indigenous communities have had to endure the abuse and trauma of colonization from Europe, the two-spirit people have often been forgotten or ignored. Reclaiming and restoring their identities is the first step of many to begin healing.

As Margaret Robinson says, “We’ve always been able to rebel against things hoisted onto us.” She laughs loudly. “Part of being Indigenous includes a bit of rebelliousness!”

MIKE OTT is a Master of Journalism candidate at Ryerson University. His interests include politics, writing, and watching terrible television. In his work, he has focused on social issues in the city, specifically queer voices and the LGBTQ+ community.