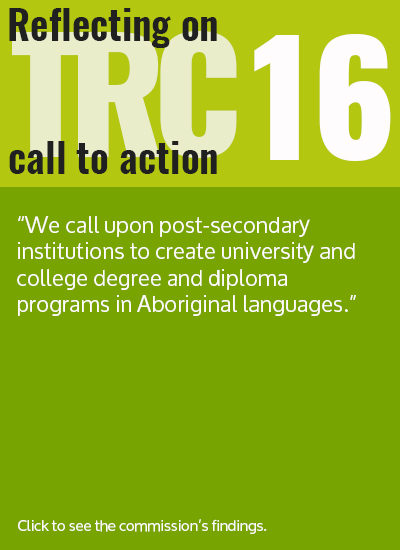 Learning a language is usually a taxing activity, but for many students attempting to acquire one of Indigenous languages in Canada, the process fraught with additional pressures.

Chelsea Vowel, a Plains Cree speaking Métis educator who currently lives in Montreal, recalls the pressure that came with being told the language would die if her generation did not master it sufficiently.

“There’s a lot of negativity involved in not being fluent and not raising your kids to be fluent,” she says. “Even when you intellectually understand you can’t do it and you don’t have the resources, you feel like maybe you could have done better.”

This pressure and lack of support, she adds, leads to many language students abandoning their studies.

Indigenous languages in Canada, like the students trying to learn them, are in need of support. UNESCO’s 2010 Atlas of the World’s Languages in Danger warned that 87 Aboriginal languages spoken in Canada were in danger of extinction. Of those languages, 30 were deemed critically endangered, a term UNESCO uses to describe languages where “the youngest speakers are grandparents”—and even those grandparents do not necessarily speak their languages frequently.

Language was one of the major aspects of Indigenous culture targeted by residential schools. Separated from their families, children were often prohibited from speaking their ancestral tongues and were instead inculcated in English. In recognition of such policies’ adverse effects, Canada’s Truth and Reconciliation Commission called on “post-secondary institutions to create university and college degree and diploma programs in Aboriginal languages.”

Translating this call to action into actual programs, however, is not as simple as offering additional courses and announcing new degrees. In a country where it is still easier to find post-secondary programs in Latin than Cree, the Truth and Reconciliation Commission’s call challenges the limits of what constitutes a university or college program and what cash-strapped universities can be expected to deliver.

Saskatchewan’s First Nations University is the rare institution where a student can earn a degree in Cree or Salteaux. Traditionally, the university offered language courses for both fluent or non-fluent speakers. “Over time we’ve seen a decrease in fluent speakers,” says Arok Wolvengrey, a professor of Algonquian Languages and Linguistics at the First Nations University’s Regina campus.

This paucity of fluent speakers only exacerbates the difficulties of teaching Indigenous languages. The director of Simon Fraser University’s First Nations Language Centre, Marianne Ignace, taught her daughter the Secwepemc language from a young age. She notes that students need—and often struggle—to surround themselves with conversational speakers who can help them absorb the language. “The bottom line,” Ignace says, “is that it takes about 1,000 hours to get to an intermediate/solid level as a speaker in a First Nations language.”

Students seeking to reach that target have a few options. Ignace says that a single university course only offers 40 hours of teaching, which makes it hard for students to reach the 1,000-hour threshold. Universities and community institutions have therefore sought to create immersion programs. The First Peoples’ Cultural Council offers a program that pairs students with individual mentors for 300 hours over the course of the year. Simon Fraser University is working with the Squamish Nation community to create an 8-month-long language academy. Ignace says the program is to have “a group of 15 or so learners” in the program studying six days a week.

How to reach 1000 Hours?
Create your own infographics

Although there are many ways to achieve the requisite 1,000 hours, none of these pedagogic strategies is limited to classroom instruction. Digital technologies have become integral to the recording and teaching of Indigenous languages. Wolvengrey says teachers can now avoid duplicating each others’ efforts and reach more students. For her part, Ignace is working on language learning apps. These developments have allowed educators and learners alike to build larger networks than were previously possible. “In my grandfather’s day, people had to travel,” Vowel points out. “Now we can do it through Facebook, Messenger, and Twitter.” However, Vowel says, “what’s going on online is not enough.”

Technology has not allowed institutions teaching Indigenous languages to overcome budgetary challenges. “At the university level, there is no money,” says Ignace. Memorial University linguist Carrie Dyck, who has been working on the Cayuga language since 1993, shares this view. She notes that the funding available to work on Indigenous languages pales in comparison with the more than $1billion the province of Ontario spends on French education each year. What little funds are allocated for Indigenous language, in turn, needs to be split between dozens of languages, all of which need revitalization. “We did get a SSHRC grant for $1million over 5 years for Cayuga language maintenance,” Dyck adds. “As soon as I had it, I realized $200,000 a year is not a lot of money.”

The 2016 federal budget included a pledge to invest $275 million in First Nations language programming by 2021, but none of that funding was allocated to post-secondary programs. When it comes to Indigenous languages, these programs have the added responsibilities of recording and revitalizing languages as well as preparing educators for future generations. “I really hope the money in the budget for k-12 is great but who’s going to deliver that?” asks Wolvengrey.

Demands for university language programs to recover their operating costs cannot easily be reconciled with the precarious status of Indigenous languages in Canada. Wolvengrey says he’d rather graduate a couple students each year than pause the program until a full cohort of 10 to 15 students can be assembled. The need for language experts is simply to great to wait. The current funding situation, he says, is “like holding a carrot out that you can have your language back, but holding it so far in the distance.”

The resource challenge in language education extends beyond universities’ campuses and affects entire communities. Since fluent speakers are scarce, post-secondary programs are particularly reliant on the knowledge, time, and contributions of community members as sources of archival knowledge and as instructors themselves. Ignace says programs need to “provide compensation for the elders who donate their time or the speakers, who we often find have challenges of health or other things to do.”

The lack of funding also affects post-secondary institutions’ efforts to immerse students in Indigenous languages. “It’s an unfair assumption of young people to expect 35-40 hours a week doing your job and learn your language on the side,” Ignace says. Wolvengrey adds that a lack of scholarships and funding opportunities discourages potential students: “We need resources, we need teachers, we need supports for the students to persevere.”

Last month, members of the Canadian Association of Applied Linguistics met Calgary to discuss the TRC’s calls to action. Dyck is one of the event’s organizers; Wolvengrey co-presented First Nations University’s position. At present, he is uncertain about the effect of the commission’s call to make post-secondary programs in Indigenous languages. “The issue isn’t simply creating them,” he says, “but allowing them to be viable, funding them properly, and allowing partnerships to arise.”

DAVID RUDIN is a masters candidate (2017) at the Ryerson School of Journalism. His interests include urban planning, economics, and soccer.