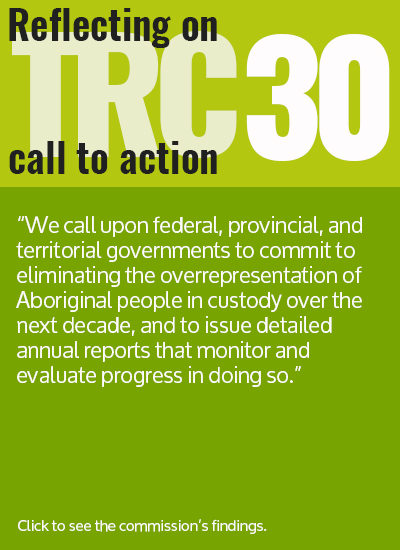 At the sentencing hearing in January, Justice David Cole turned to Jason Gardner and spoke to him directly. “You will need to be a strong and persistent advocate for yourself,” he said. “Passivity and sullen resistance will get you nowhere, except possibly to be ‘gated.’”

Gardner had pled guilty to two counts of aggravated assault for offences committed in 2012. With 10 previous violent-offence convictions, the crown was seeking to have him designated a dangerous offender – a designation reserved for the country’s most dangerous criminals and sex offenders – and imprisoned indeterminately. In the end, Gardner did receive the dangerous offender designation, but the judge ultimately settled on a lesser sentence: 810 days of detention followed by a long-term supervision order of ten years.

Among the mitigating factors that were considered during sentencing is the fact that Gardner is an Aboriginal offender. Since 1996, when the Liberal government amended section 718 of the criminal code, judges must consider options other than imprisonment for all offenders, “with particular attention to the circumstances of Aboriginal offenders.”

The court’s decision in Gladue helped established a specialized court system for Aboriginal peoples. In 2001, Aboriginal Legal Services of Toronto (ALST) and the Old City Hall courthouse in Toronto established the province’s first Gladue court, a specialized court with judges that have been trained in issues of relevance to Aboriginal peoples. Gladue services are now offered in several courts throughout the province.

In cases were an Aboriginal person has pled or has been found guilty, Gladue report writers can be asked to prepare a Gladue report, a form of pre-sentencing report that explores the life circumstances of the offender and offers culturally appropriate treatment programs for the judge to consider during sentencing.

“The Gladue report provides an honest opinion regarding the individuals’ motivation for rehabilitation and proposes community-based options, with a detailed treatment plan that responds to the needs of that individual,” wrote Lorie Arias in an email.

Arias is Ojibwa from the Chippewas of the Thames First Nation. As a Gladue report writer with the N’Amerind Friendship Centre in London, Ontario, she has prepared over 125 Gladue reports. “As the Gladue writer, I strive to encourage the Court whenever possible to consider all other viable options other than incarceration to address the well-being and healing of the person before the Court, which may also support the wellness of all Indigenous people.”

Details of Gardner’s Aboriginal heritage were presented to Justice Cole in a 61-page Gladue report prepared by Jennifer Bolton, a caseworker with ALST. Bolton found that Gardner’s paternal grandmother and three of his aunts and uncles were residential school survivors. His mother, Virginia Allen, was “scooped” by the Children’s Aid Society in 1966 – along with thousands of other Aboriginal children who were forcibly removed from their home, in what is known as the Sixties Scoop –  and sent to live with a non-native family named Gardner in Mississauga or Orangeville. These events had a direct impact on Gardner and his family. Gardner was physically, emotionally and sexually abused during his childhood, and was involved in substance abuse at an early age.

In his reasons for sentencing, Cole writes that Gardner’s Gladue report is a “very comprehensive and helpful document [that] makes for hard reading, because it so forcefully mirrors the kind of searing fact patterns so eloquently and painfully described in the recent Truth and Reconciliation Commission Report.” The circumstances of his life, he adds, “more than adequately explain how Mr. Gardner has unfortunately reached the stage he has.” Nevertheless, Cole wrote in an email that, while he thought about Gladue/Ipeelee factors throughout the sentencing process, “in the end, they didn’t figure hugely in the decision.”

The reasons for this are twofold. First, Gladue does not mean that Aboriginal offenders automatically qualify for a lesser sentence. The more violent and more serious the offence, the more likely it will demand a similar sentence as for a non-Aboriginal offender. Secondly, Cole said that he believes judges who can get to a “restrained position” without resorting to Gladue factors should do so, citing recent cases in Saskatchewan where the trial judge applied Gladue/Ipeelee factors in dangerous offender cases, only to be “sharply repudiated” by the Saskatchewan Court of Appeal. “Since Gladue/Ipeelee are still relatively new developments that are being ‘fleshed out’ by trial and appellate courts,” he wrote, “I would prefer to reach a result without resort to that case law.” In other instances, he said, judges cannot avoid expressly referring to Gladue in the sentencing of Aboriginal offenders.

Addressing the criminalization of Aboriginal peoples

While the court’s decision in R. v. Gladue was considered ground breaking, it alone hasn’t been able to address the issue. The proportion of Aboriginal peoples in prison continues to increase, even as overall incarceration rates are on the decline in Canada.

In January, the CBC reported that, for the first time, more than a quarter of inmates in Canadian federal prisons are Aboriginal. The numbers are even higher for Aboriginal women, with more than one third of women in prison being of Aboriginal descent.

This issue was raised by the recent report released by the Truth and Reconciliation Commission of Canada (TRC). As part of its Calls to Action, whose purpose is to “redress the legacy of residential schools and advance the process of Canadian reconciliation,” the TRC is calling on the government “to commit to eliminating the overrepresentation of Aboriginal people in custody over the next decade.”

That Gladue has played a role in determining an appropriate sentence for some Aboriginal offenders is evidence that the system can work. But, as the TRC report has made clear, there remains much work to be done to eliminate the over-representation of Aboriginal peoples in the criminal justice system.

The provinces of Saskatchewan and Manitoba, which have very high incarceration rates – in 2001, over 50 per cent of their jail populations were Aboriginal – don’t even use Gladue reports. As a result, judges in those provinces do not have the information they need to sentence offenders justly. And, according to Jonathan Rudin, program director of ALST, in provinces where the reports are used, many judges simply aren’t implementing Gladue. Rudin said that the key to realizing change is using Gladue not only to look at the circumstances of the individual, but also to look at all available non-jail options.

“Gladue and Ipeelee both speak to the fact Aboriginal people experience direct and systemic discrimination in the justice system itself,” he said. “We’re not creating two systems. We’re trying to create one system that actually works for everyone, because right now it’s impossible to say that that’s the case.”

While many of the TRC recommendations are directed at government officials, Rudin said that dealing with the criminalization of Aboriginal peoples is more about funding Aboriginal organizations to do the work. The Gladue court system itself was established independently of government, proof that the judiciary can enact change from within. But these programs, Rudin said, require the financial support of the government. “Creating Gladue courts, that’s not something governments can do,” he said. “But they can facilitate their development.”

JUSTIN DALLAIRE is a master’s candidate at the Ryerson School of Journalism. His work, which has focused on Canadian politics, culture and university life, has appeared in the Fulcrum, the Guard of Honour, and Ryerson Folio magazine.